I was born at 24 weeks only weighing 1lb 11oz and the only surviving triplet which means i have cerebral palsy affecting all 4 limbs, profound hearing impairment and severe sight impairment. After spending five and a half months in hospital I was allowed home, a world of challenges awaited from that moment onwards. I spent a year on oxygen and with lots of hospital appointments and check-ups.

I went to the White Lodge Center from when I was a baby until the age of 4. White Lodge supported not only myself but my family too. At White Lodge I attended the nursery and did physio and hydrotherapy to begin to develop my muscle tone strength. The support I received from White lodge was amazing and without their support at the time we would have struggled to get the right support etc. White Lodge will always play a part in my journey. I didn’t take my first independent steps until i was 7 after attending footsteps for 3 weeks of intense physio.

So what happened later on in life…..

In 2014 I began wheelchair racing with the Weir Archer Academy after feeling inspired at the London 2012 Olympics. In 2015 i got classified as a t33 wheelchair racer, t33 is for athletes who have coordination and balance problems and all four limbs are affected. I’m currently ranked No.1 in the UK and within the top 4 in the world rankings across 100m-800m. I’m coached by Jenny Archer MBE and mentored by David Weir CBE. They set up the academy after the 2012 Olympics to help inspire the next generation of disabled athletes to get involved in disability sport. The academy is not just about being the top athlete, it’s about athletes that just want to have the friendship through sport with the confidence of being with other disabled people. Back in 2014 to 2016 I couldn’t race in a straight line, so the very first races I went from lane 1 to lane 8, now I can race straight! This has been through improving my coordination and strength through the years and from the help of the coaches and athletes from the academy. Last year I raced at the CP World Games wearing the England Kit, where I brought home a Bronze in the 200m and a Silver in the 400m just missing out on a medal achievement in the 100m. In December I was invited to the Pride of Sport Awards where I was awarded Young Sports Person of the Year 2018. This made all the hurdles of challenges that I have overcome worthwhile. Sport has changed me as a person not just physically but also mentally.

This year has been life changing as i had bilateral cochlear implant surgery in January and before this I couldn’t hear the sounds that I’m hearing now, such as the start gun and i was restricted to what I could hear on the phone. Now thanks to the cochlear implants I can have a conversation on a mobile phone and can hear sounds that I never heard before or even knew made a sound!

I was introduced to Grant from Ability Today while at a White Lodge VIP evening. I was invited to volunteer and then was asked if I would be an Ambassador, which of course I was delighted to accept and be given the opportunity.

My race programme has been hectic this year and I have progressed in both UK and World rankings. I have been invited by British Athletics to race at the London Stadium in the Muller Anniversary Games on the 20th July in the T33/34 100m final. 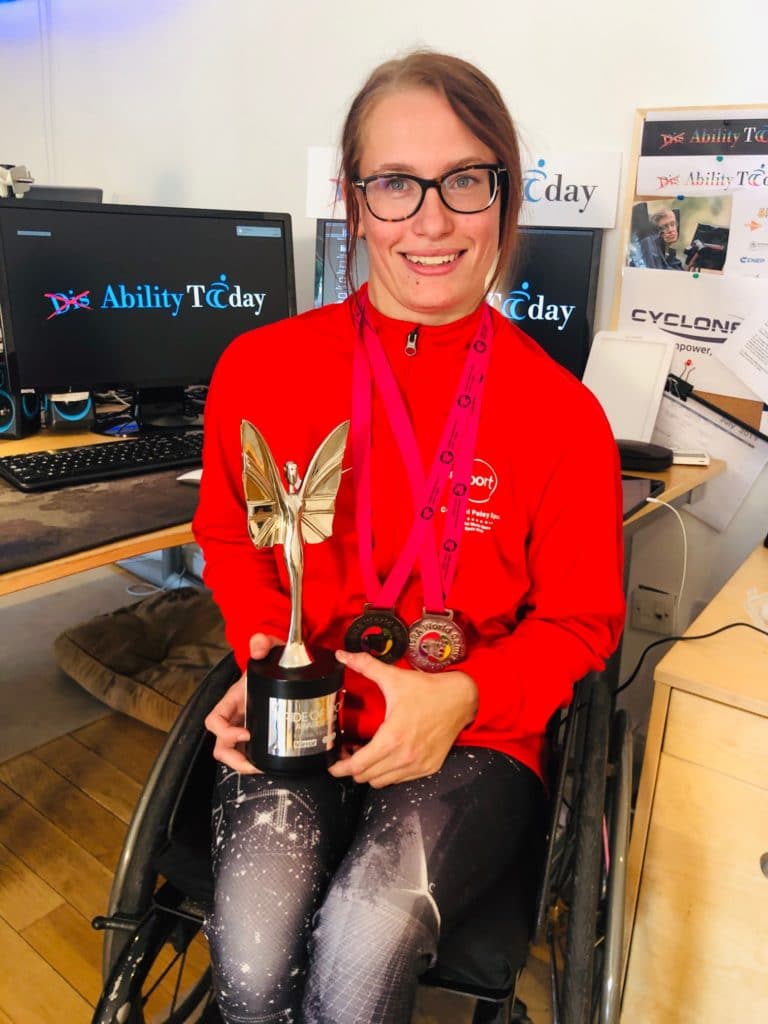